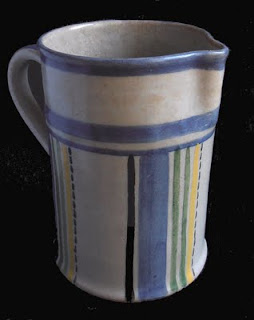 This early Poole jug is well travelled.  It was listed on eBay in Australia at the beginning of this year and spent 3 months on an ocean crossing to arrive back in England.  The jug is 5 inches tall and dates from about 1921, there is an indistinct painters mark and no shape number that I can make out.  It does have a lovely tactile, gently pinched spout.
Posted by Robert Barnsley at 15:46 0 comments 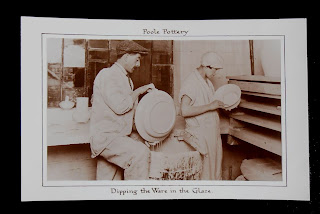 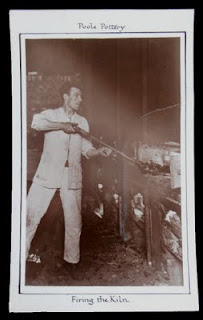 I found some more old postcards to add to the other images on the website.  Top, "Dipping the ware in the glaze" and under that, "Firing the Kiln".  Both have the date 4/9/1933 written in pencil on the back.  If anybody can tell me anything more about the images or people I'd love to know.  You can see the other cards here.
Posted by Robert Barnsley at 12:06 0 comments There's a photo of a trapezium shaped dish with the same image of Guildford Cathedral in the Hayward and Atterbury "Poole Pottery" book. So I've been hunting for one of these for a long time, and maybe there are fewer around than you'd expect, though I don't think rarity makes everything particularly valuable.  It dates from somewhere between 1959 and 67.  Anyway, I love the square shape,, I like the connection of pottery and architecture and the decoration has a nice feel to it, screen printed and hand coloured. I've got a very similar dish of Coventry Cathedreal on my website.
Posted by Robert Barnsley at 00:52 0 comments

I'm meant to be focusing on updates to the main website this week (and last week, and the week after) but when this arrived through the post this morning, I couldn't wait to post a photo here.
This is now my oldest Poole pot by a good few years.  It's an example of unglazed ware developed by James Radley Young, through the war years, from 1914.  It is signed on the baser Carter Co Poole, a mark used from 1908 until 1921.
Posted by Robert Barnsley at 12:29 0 comments 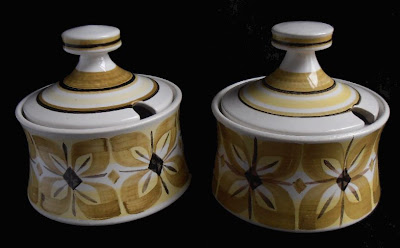 The latest addition to my Bokhara jar collection. Designed by Robert Jefferson in 1964, these hand-thrown jam pots (shape number 657) are painted in OGB pattern by Mary Lowman on the right, with the one on the left carrying mark for Silvia Davis, although she's recorded as working only until 1962.
Anyway the two pot appeared separately on eBay last week and after winning the first (no.12 in my collection), I thought the second could be used to swap with any other Bokhara fans, or maybe might even get used for jam!
Posted by Robert Barnsley at 02:53 0 comments

I found this one a few months ago on eBay.  It was a bit dirty and has a couple of hairline cracks, but the pattern is so good I bided for it anyway, and the great thing about cracked pots is that you don't need to worry too much about using them.  Although I'm not sure any Poole vase would be happy to contain water, cracked ones do make great pen holders. It's a great looking vase until a perfect one comes along and Shape number 974, 7" tall, painted by Hilda Hampton in the early 1930's.
Posted by Robert Barnsley at 02:49 1 comments

These Tiles were made by Janet Parker Laird and exhibited on the North Dorset Art Trail that Janet participated in earlier this month.  I could't get down south to see it myself, but Janet has posted some photos of her work on show on her blog janetparkerlaird-ceramicartist, and trusted these three tiles to the post for me last week. They're are the only pottery I've collected from new, but they will sit very happily with the other work I have from Janet's Delphis days at Poole Pottery.
Posted by Robert Barnsley at 02:18 1 comments 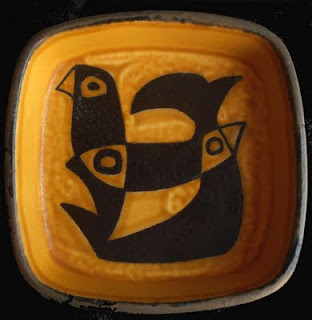 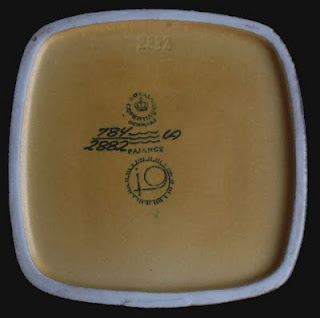 This is the pot I found at Lincoln this week.  It's not Poole Pottery, but it is a lovely dish, so I know I shouldn't be disappointed with my trip.  The dish was made by the Royal Copenhagen factory in the 1970's, and the pattern designed by Johanne Gerber.  It's also signed by the person who decorated it, but I'm not sure who that mark belongs to, so I've included a photo of the base in the hope that someone else can tell me this and more about the dish.
There are definite influences from Scandinavian pottery on Poole of the 1950's, 60's and 70's. And I think other pottery blogs are starting to have an influence on me too.  In the absence of Poole at Lincoln, as well as buying this dish I was also drawn repeated to Hornsea Pottery cruets and storage jars from the same period.  For an idea of how good these things look Potshots blog is a good place to start.  I just wish I had room for more.
Posted by Robert Barnsley at 01:49 2 comments 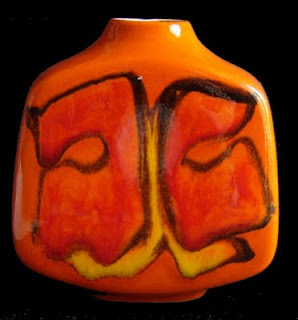 I went to the Lincoln Antiques Fair on Tuesday. With an early start (in fact I overslept, but still got there for 9 am) and armed with fair amount of cash, I came away without a single piece of Poole.  There were a few Poole pots there, but nothing really that made me want to buy them, and as I wondered about I started to worry that I'd begun to lose interest in collecting!
Today I still find that thought a bit worrying. Lincoln is a massive fair.  There might have been a few hundred thousand objects to see, so it's hard to believe I came away with nothing.  I was there on day two, so I guess some of the best buys might have been snapped up already and I perhaps I'm a bit spoilt by eBay (were again this week there are over 100, 000 listings under the Pottery subheading alone).  Perhaps too, finally, I'm starting to be a bit more selective in what I collect.
Anyway, I did buy one pot, just not a Poole pot, but a Royal Copenhagen BACA dish, showing a pattern of birds and fish designed by Johanne Gerber in the 1970's.  If I'm not careful it could start a whole new area of collecting because it looks so stylish.  I'd post a photo of it now, but to add to my sense of unease my camera broke yesterday too, so that will have to wait.
Instead, I've posted a photo of a Delphis vase I found the last time I went to Lincoln.  This is a less common shape (no. 35), only made for one year, its 10cm tall and was painted by Andree Fontana in 1975.
Posted by Robert Barnsley at 11:54 2 comments 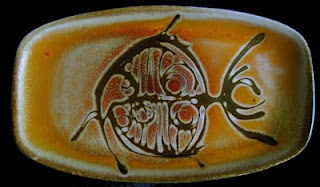 This Poole Aegean sweet dish came from Lincoln Antiques Fair, a couple of months ago.  I'll be off to that fair again next week, so its high time I posted a photo of this.  As the figurative Aegean patterns go , I think the fish have a bit more appeal, than the boats at least, and the other animals and landscapes that decorate Aegean plates are much less common and probably out of my price range.
It's shape number 361, 7 inches long, decorated by Carolyn Wills using the silhouette technique.  Carolyn worked at Poole from 1972 until 1979, her sisters (i think) Julia and Laura also Decorated Aegean ware at Poole.
Posted by Robert Barnsley at 03:22 0 comments

This spoon was made by Wales Association of Pewter Works.  They seem to specialise in making small models of wizards and mythical beasts, holding little crystal balls, as well as making spoons with various crests on top. Some of the crests are enamelled badges stuck on, but this one has a quite roughly cast Poole dolphin with "Poole Pottery" written underneath. Which is why it's ended up with me.  I imagine that it could have been sold at the pottery but I like to think that it's one of a set along with other famous pottery names.
Posted by Robert Barnsley at 01:00 0 comments 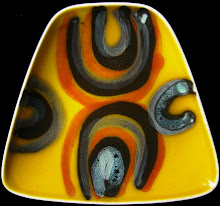